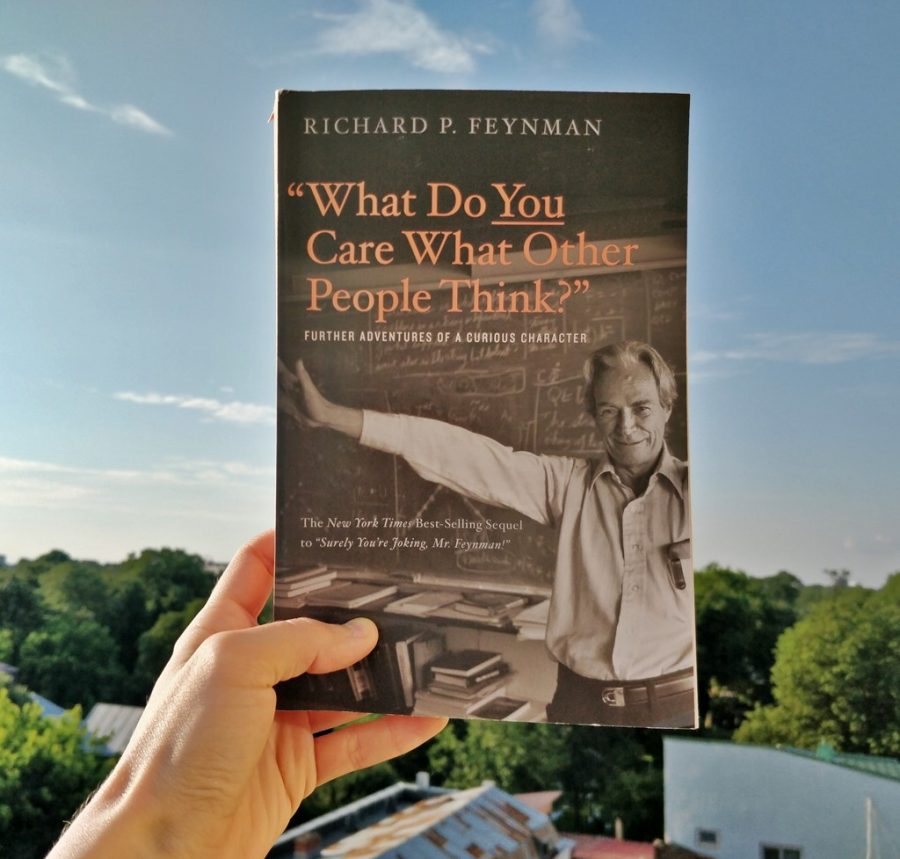 In the past 11 months, since I started Friday Read, I’ve contributed to the birth of multiple extraordinary newsletters. I’ve encouraged my friends (individuals and brands altogether) to take the leap and start building their own mailing lists, I’ve putting pressure on them, giving them feedback, sharing everything I learned, providing technical and moral support, and I’ve also publicly praised them whenever I had the chance. I even mentioned some of them here.

What I can’t wrap my head around is some folks’ obsession over competition. I never know how to reply when I’m asked how come I have the courage to publicly promote my „direct competition”, share everything I learned and every single mistake. Why am I not afraid that others will steal my sources, ideas or know-how? There were even a couple newsletter creators that were afraid that I might „get mad” cause they started their own mailing lists, after I inspired them with Friday Read. My complete opposite reaction took them by surprise.

That’s because the competition is, first and foremost, against myself, not against others. Sure, a dose of external competition helps as well – by constantly holding myself to a higher standard, I’m getting out of that warm comfort zone and playing at a harder level, accelerating my growth. But I do want others to take everything that I’ve learned and build on that – and I want to be right next to them when it happens, so that I can further my learning.

And, if everyone thought that way and wouldn’t be willing to share anything with their peers, where would we be now? (Harari has a good answer)

I might have been partially responsible for the reborn popularity of robustly built newsletters in Romania, but they were never my creation to begin with (thank you, Mrs. Obvious).

Others inspired me and I’m grateful that I had the chance to learn from them. You surely know who I’m referring to, I always mention their names and recommend their work, and even wrote an article about the ones behind my favorite newsletters.

Ryan Holiday probably had the biggest influence over my decision to start this newsletter. Here’s how he grew his mailing list from 0 to 50,000 subscribers, by sending a monthly newsletter with books. Please note that this article was written 4 years ago, so the numbers are outdated.

Another great resource on how to start a newsletter, from Kevan Lee, Buffer’s director of marketing – this one’s more on the technical side.

And check out how Austin Kleon puts together his own Friday newsletter – this one’s on the content side.

Since my own Friday Read will soon celebrate one year, I’ll write an article about my own lessons learned – especially on the topic on why I unsubscribe those who don’t open my emails for several weeks in a row and how that led to an average 70% open rate (cc: those following marketing „good practices”

Since last week’s link to Naval’s talk with Shane Parrish was so successful and had a bigger impact than expected, I’m back with more Naval-related resources. Here’s a list of Navalisms – awesome quotes extracted from his interviews, guest appearances and social media posts. And, for those of you who like putting things into a context, here’s an article titled „5 lessons from Naval Ravikant for future me„.

„I am currently on vacation and not accepting any emails about anything. I’m not planning on reading any old emails when I get back, either, because that feels antithetical to the vacation experience.”

How’s that for a bold out-of-office message during your holidays? It’s true: most of us receive so many emails during time spent off the grid, that it defeats the purpose. After you come back, you have to work at least 3x more and exhaust yourself catching up with emails.

So here’s an interesting new approach to put to test: write in the auto-responder that you’re off and you won’t be reading the emails sent until the date of your return. As a matter of fact, let them know you’ll be deleting those. Give someone else’s contact info for emergencies. And ask people to resend the email after that date, only in case it’s so important and you’re the only one who can help.

Further reading: Brad Feld’s article on how to deal with email after a vacation, Fred Wilson’s email bankruptcy, and an article in The Atlantic (first quote’s source).

Remember what I said a few weeks ago, about writing about the things that I personally need most at the moment? Lately I feel like I’ve been drowning in emails. It’s like fighting Medusa: cut one head off, five more grow into place (in this case, reply to one, get three more emails in no time). This never ends, does it?

What bothers me most is that I’m wasting my mental energy on small things such as email and this is keeping me away from life-changing work that only I can do, work that’s more important on the long term perspective. I need to set some new boundaries in place, otherwise I’ll drive myself crazy.

Every time I read a non-fiction book that’s extremely popular or gets me excited, I also search for all the counter arguments and read those as well. This usually bursts my bubble and tempers me. I might not agree all the time, but at least I’m now aware of the potential problems underlying. I also try to exercise my devil’s advocate arguing skills and look at everything from the opposite side of view.

Of course, I’m not talking about hard science fields here, I’m talking about pop science. And Nat Eliason wrote a long and interesting article on 16 popular psychology myths and why they are wrong – well, partially wrong or exaggerated, in some cases.

The 10,000 hours rule is one of them, for example – popularized by Malcolm Gladwell via „Outliers„, the research was so misrepresented that the original author had to write a book to explain what he actually understood from his work.

Grit, the marshmallow test, growth vs fixed mindset and willpower depletion are some of the other concepts Nat talks about and explains what’s wrong with them.

A long quote from an interview with actor, writer, producer, director and comedian Aziz Ansari, on why he chose to delete from his phone the web browser, stopped using email, Twitter and Instagram:

„Whenever you check for a new post on Instagram or whenever you go on The New York Times to see if there’s a new thing, it’s not even about the content. It’s just about seeing a new thing. You get addicted to that feeling. You’re not going to be able to control yourself. So the only way to fight that is to take yourself out of the equation and remove all these things. What happens is, eventually you forget about it. You don’t care anymore. When I first took the browser off my phone, I’m like, [gasp] How am I gonna look stuff up? But most of the shit you look up, it’s not stuff you need to know. All those websites you read while you’re in a cab, you don’t need to look at any of that stuff. It’s better to just sit and be in your own head for a minute. I wanted to stop that thing where I get home and look at websites for an hour and a half, checking to see if there’s a new thing. And read a book instead. I’ve been doing it for a couple months, and it’s worked. I’m reading, like, three books right now. I’m putting something in my mind. It feels so much better than just reading the Internet and not remembering anything.”

Do read the whole GQ interview, he later goes into the subject of ignoring news and why this can at sometimes make him feel extremely lonely, while beneficial for his professional side: Aziz Ansari on Quitting the Internet, Loneliness, and Season 3 of Master of None. 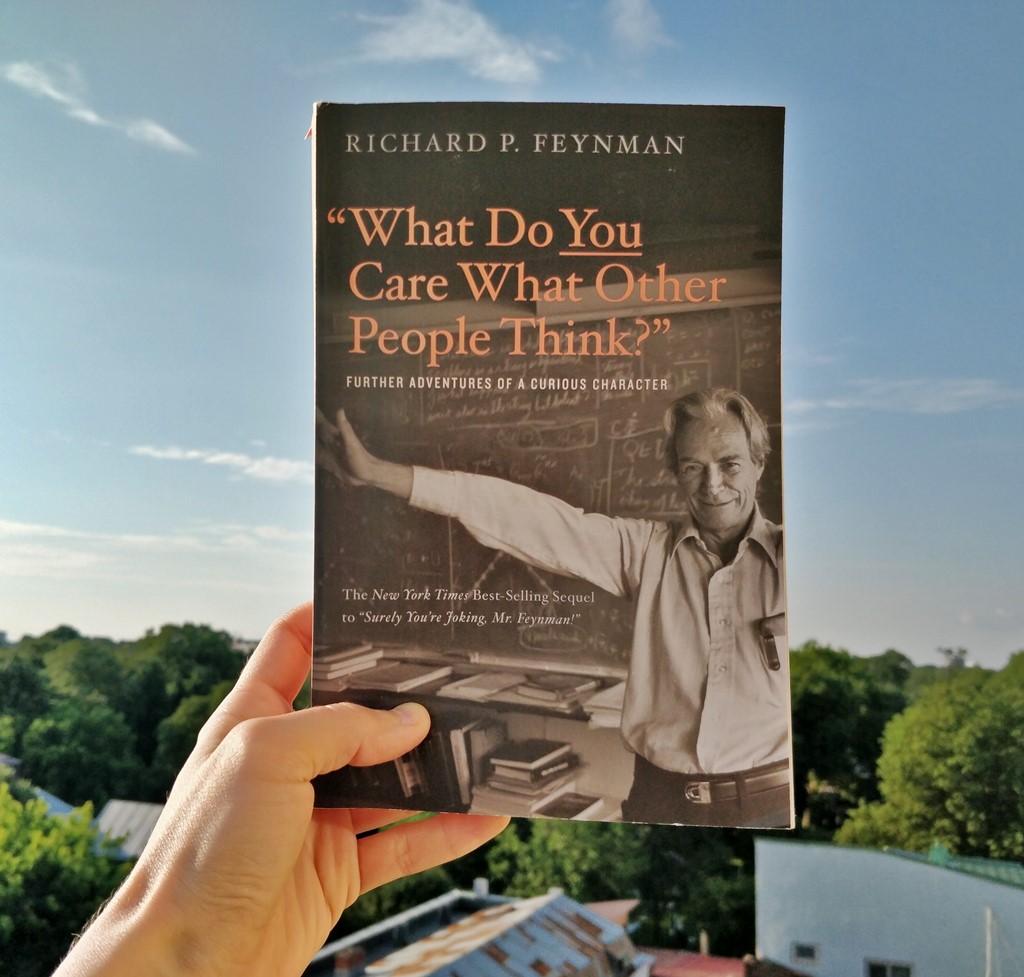 Mr. Feynman kept me awake with his stories during last summer, and now he’s doing it again this summer.

So, who is Mr. Feynman and why do his stories have such a big impact over my sleep?

Born a century ago, Richard Feynman was one of the world’s most important scientists. Nobel-prize winning physicist specialized in quantum mechanics, he’s renowned for his work on the Manhattan project, nanotechnology and the investigation of the Challenger disaster, among many-many-many other accomplishments.

I love him for his insatiable thirst for knowledge, driven by an intellectual curiosity to understand how this world works, his rejection towards conventional wisdom (he questioned everything), his ability to explain extremely complicated things using simple words, and how much he enjoyed life overall.

If you haven’t read „Surely you’re joking, Mr Feynman!„, start with that one instead and only afterwards read this sequel titled „What Do You Care What Other People Think?„. These are his memories, comprised of interviews and stories told to his good friend, Ralph Leighton.

I’m ending today’s Friday Read with one of his most famous quotes: „The first principle is that you must not fool yourself, and you are the easiest person to fool„.