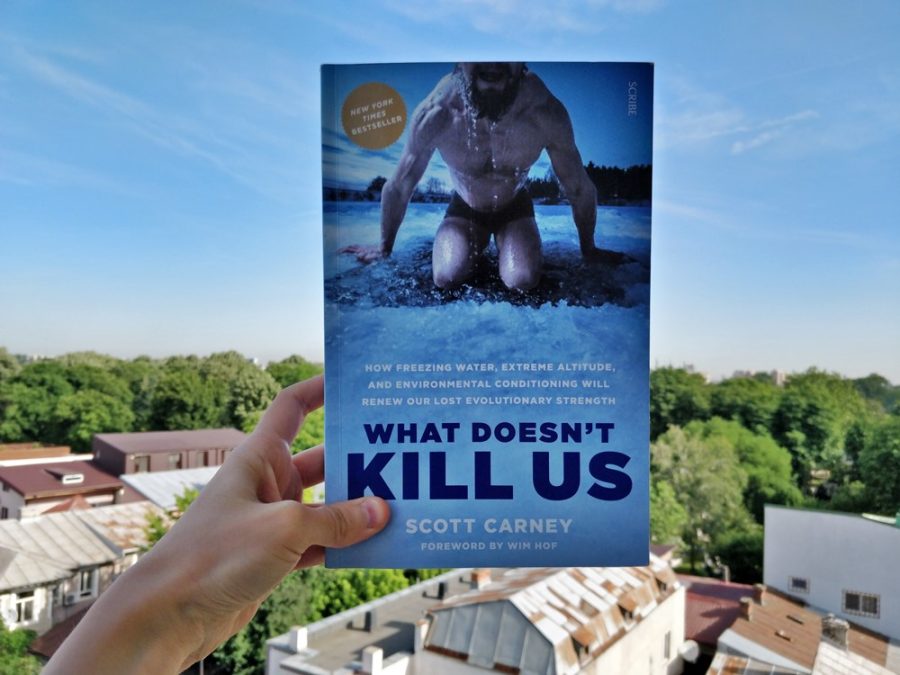 It’s been almost one week since I stopped drinking coffee – a painful process that ruins my morning ritual. I loved waking up to a mug of coffee that was freshly ground and prepared by my better half. I loved its smell and the habit of slowly drinking it for the first 4 or so hours of the day. It was my way of telling my brain that it needs to wake up and start working on whatever task I had planned for that morning (usually something that involves writing).

From time to time, at least once per year, I’ve been taking breaks from caffeine. These usually come right after a period when I’ve exaggerated with the dose and switched from one cup per day (half of which is actually milk) to two or even three. It’s an old exercise of mine, probably weird and hard to explain to others, but I’ll give it a try.

I do this for a couple of reasons:
1. I don’t want to feel that anything else has control over me, I don’t want to be addicted. In case sh*t ever hits the fan and these things cease to exist, I’ll be prepared (I know, I’m only talking about coffee, it’s not the end of the world, but think about all the people who become grumpy if their daily rituals are messed up).
2. Going cold turkey for a few weeks will make me fully appreciate it again, when I eventually do go back to drinking it.

This is also the reason why I’ll often go out underdressed in the middle of the cold winter weather, without a jacket, or even wearing sneakers when it’s snowing (which leads to everyone else looking at me like I’m a homeless person – or just plain crazy). I’ve also been on and off intermittent fasting diet in the past years, without even knowing it’s called this way.

Going back to coffee, the first day without it was the hardest – I tried to do my usual training and gave up after running only 5k – considering I’m normally able to run a marathon without any prior notice, that training was frustrating. All the more reasons why getting myself off coffee is a good thing to test my actual limits, without any external dependencies.

This is a useful stoic exercise as well. Voluntarily making my life harder and stripping it of all those things we take for granted leads to greater self-control and mental strength.

What day-to-day small addictions do you enjoy?

As you’ve probably gotten used by now, from time to time I’ll send a special Friday Read, with all links revolving around a central theme. So far I’ve sent one dedicated to stoic resources, and another one about the digital tools that help me cope with the overload of information.

Today’s email is a token of appreciation to all the awesome newsletters I’m personally subscribed to. I’m talking about great content sources that I’ve been closely following, those that impacted me in the past years. I’m trying to keep a zero inbox („try” being the key word here – I’ll often procrastinate replying to an email for an unpermitted long time), but, at the end of the week, I will read every single one of these newsletters.

1. Daily Stoic – this is the only daily newsletter I’m subscribed to. It’s Ryan Holiday’s project, created to promote his book with the same name, and my favorite stoic resource. Every afternoon I receive a small nugget of stoic wisdom, just when I seem to need it most. On the website you’ll also find long articles with stoic reflections and exercises, together with interviews with stoic thinkers and leaders.

2. I probably should have started with Ryan Holiday’s newsletter, since this is the one I’ve been subscribed to for a longer time than anything else. He sends a monthly reading list of what books he’s personally read and recommends. His newsletter was among the factors that motivated me to start Friday Read, so now I hope you understand why in every email I include a link of an article or any material related to him.

3. Brain Food from FarnamStreet Blog. A curated Sunday newsletter with content released that week on FarnamStreet Blog, together with book recommendations and articles curated by Shane Parrish, the creator of this project. This is also one of my favorite sources of brain-expanding knowledge. I’ve mentioned Shane’s articles and podcasts so many times in this newsletter that I’m hoping you’re already familiar with his work. If not, drop whatever plans you had for today and delve into his work. Start here.

4. CreativeMorningsHQ – another awesome source of curated articles from around the web. I hope you already know about the CreativeMornings series of events – this is actually how I ended up subscribing to this newsletter, I wanted to keep up with their events in Bucharest, where I’m based.

5. Azeem Azhar’s Exponential View: a curated weekly newsletter (also sent every Sunday) about technology, artificial intelligence, and their impact on our society. What I enjoy most is that every few weeks he’ll invite an interesting thinker as a guest to curate his newsletter – something that I’ve been recently considering doing for Friday Read as well. One of his newsletters was curated by Toomas Hendrik Ilves, President of Estonia until 2016 and first digital head of state, for example – how awesome is that? (I think I forwarded that one to 11 friends or so)

6. I also get a mix of curated articles from Medium and Pocket – two other awesome resources for discovering interesting content. The one from Medium is based on what publications you’re subscribed to. Pocket is one of my main digital tools, alongside the RSS feed reader, so I’m an old, loyal and paying user of their app (and probably one of their biggest hoarders of articles waiting to be read – I’ve reached somewhere over 1,400 last week – I swear I’ll do some cleaning soon).

7. Andra Zaharia, one of my best friends, recently started a weekly newsletter about decision making, called „How do you know?„. Together with it, she also started a podcast where she interviews guests on this topic. So far she released two episodes: in the last one, she talked to Benji Hyam, from Growth and Convert. The first episode was with Eric Moeller, Director of Product Marketing and altMBA coach (altMBA is Seth Godin‘s intensive online workshop designed for high-performing individuals who want to level up and lead). I highly recommend both her newsletter and her podcast episodes.

8. Sol Orwell‘s newsletter – it’s actually a series of thoughts, personal stories and lessons learned from his experience. Sol’s been making money online for almost two decades, he’s the founder of Examine.com, the largest database on nutrition and supplements. Come to think of it, I first found out about Sol a few years ago from one of Benji Hyam’s newsletters, when he wrote about how Sol built a 7-figure business off of Reddit (see what I wrote above at #7). I also recently had the chance to interview Sol for The CEO Library, where he talked about why he dislikes business books. It’s a small world.

9. 5-Bullet Friday from Tim Ferriss – a short weekly dose of five cool things that he’s enjoying (from books to music) or quotes he’s been thinking about. As you probably know by now, I’ve read all of Tim’s books (even multiple times), I’m a loyal listener of his podcast (I’d recommend it to anyone who plans to start a podcast), so no surprise here.

10. Writing Routines is the third newsletter I’m mentioning today that was initiated by Ryan Holiday – and I swear I’m not getting paid for this. It’s simply that good. If you’re like me, fascinated to learn more about other people’s routines, you’ll probably enjoy this one. It’s about the habits & routines of those who make a living out of writing. 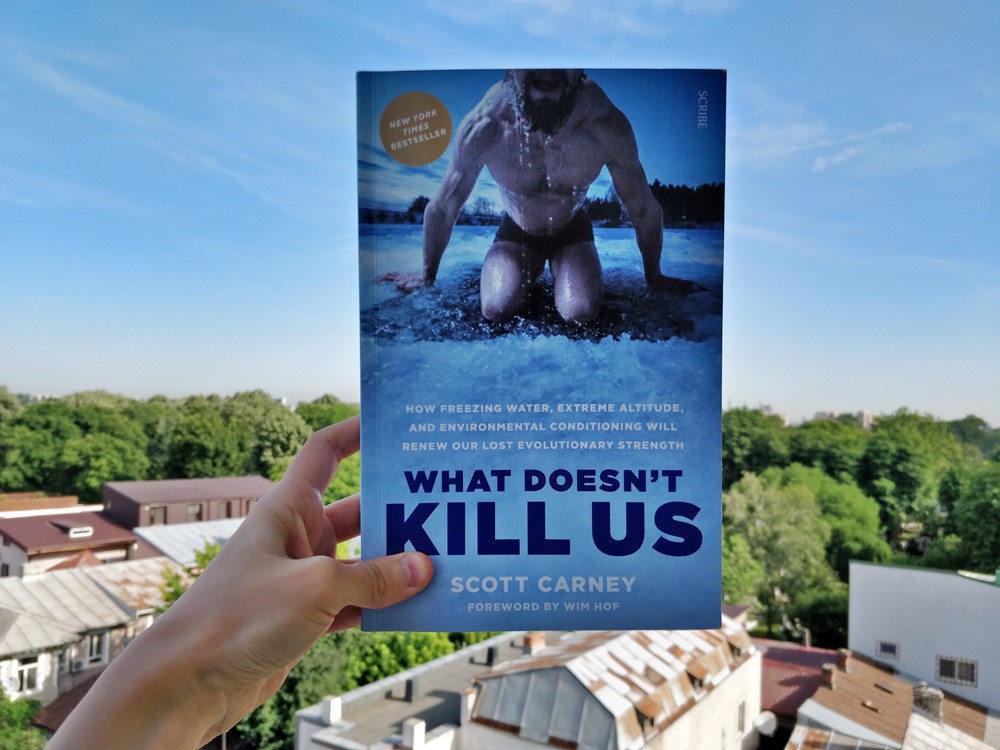 Just finished reading Scott Carney’s „What Doesn’t Kill Us„, a book that revolves around Wim Hof, a dutch extreme athlete known as „The Iceman”, famous for his (seemingly crazy) experiments with cold.

Wim Hof believes that the things we have built to keep us comfortable and safe are actually keeping us weak, and cold is a great fortifier for our immune system.

This theory is based on our evolutionary journey: for the better part of it, humanity was dominated by calorie scarcity and cold exposure. In the past decades we’ve somehow solved both, and now the lack of those stressors led to new health issues.

While I enjoyed the subject and I’ve been meaning to learn more about Wim Hof for a couple of years, I didn’t enjoy that much how the book was written. It reminded me of Christopher McDougall’s investigative journalistic style from „Born to Run„, by building around a main endurance story with tons of research and experiments tried by the author, while introducing other tangentially related and relevant people. However, it seemed a little bit bloated at times, as if he was trying to keep it politically correct and include every possible argument, and also superficial – adding information just to cross off things from a checklist.

These might be a better fit to read if you want dig even deeper on the subject: Nassim Nicholas Taleb’s „Antifragile„, Steven Kotler’s „The Rise of Superman„, Cristopher McDougall’s „Natural Born Heroes„, and the first section (the Health one) from Tim Ferriss’s „Tools of Titans„.

For those of you who’ve made it this far – congratulations and thank you!

I have a small surprise for you.

As you already know, five months ago I decided to quit Facebook – it started as a one-week experiment and turned into the best decision I’ve made for my mental health. It so happens that my favorite Romanian magazine, DoR (Decât o Revistă), challenged me to write a few words about my struggle with social media – which I gladly accepted. My article will appear in their new number (#32). If I’d have known that that’s what it takes to see my name written in their page, I would have quit the social network earlier.

On the wonderful cover of this number you’ll see sculpture of Laura Codruța Kövesi, Romania’s anti-corruption chief, created by Lea Rasovszky and photographed by Alex Gâlmeanu  – three names that I highly admire for their work.

That being said, I have 10 copies of the magazine that I want to give as a token of appreciation to you. If you want one of them, all you need to do is send me until next Friday a few words about what you’ve done so far to try and keep social media under control and not let it control you. Have you set any rules or boundaries? Any apps that you found useful? Talks to your friends and families? Just reply to this email and let me know. I’ll reach out to you and personally send you the magazine.

I’m gonna end today’s novel-long newsletter with a quote from Seneca: „I say, let no one rob me of a single day who isn’t going to make a full return on the loss.”

Stay uncomfortable until next Friday.