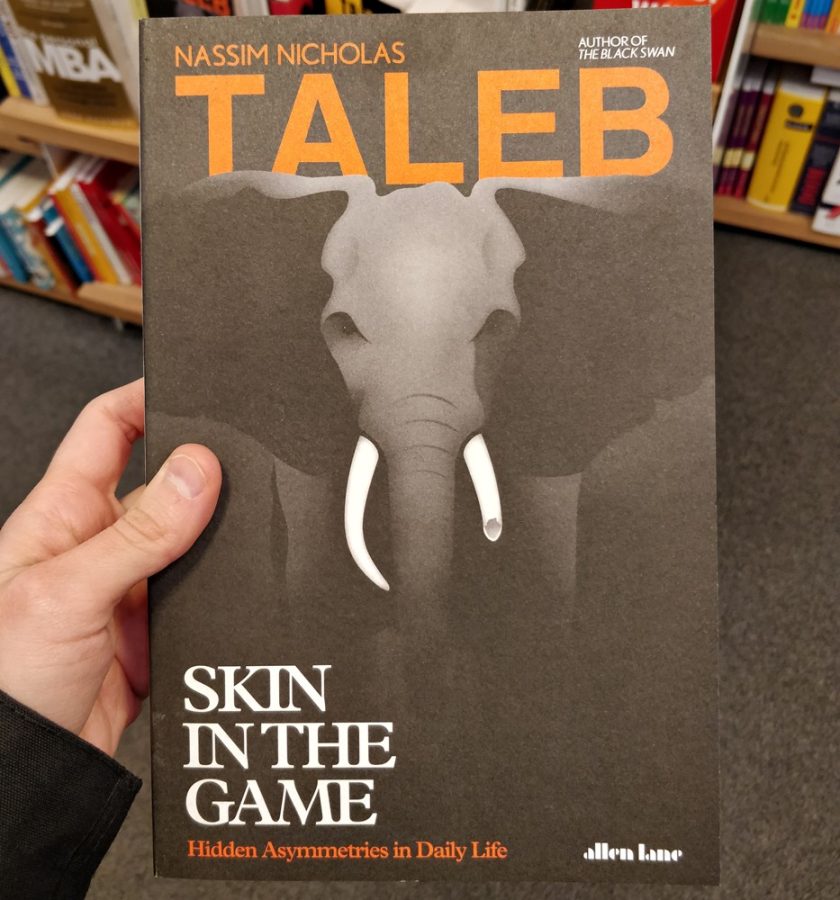 Today I woke up thinking about these words (they were tweeted yesterday by Ed Latimore). I’m always up before 7, without setting an alarm clock, no matter if it’s during week days, weekends, holidays or vacation.

However, It hasn’t always been this way. Just a few years ago, I was so frustrated with my work (and life in general) that my sleep schedule was completely messed up. I was either not sleeping, or sleeping too much.

Most of the nights I wasn’t sleeping at all – well, I also had a good excuse, given that I was working in the music industry, and most activity takes place at night.

And then there were the „nights” when I was falling asleep after sunrise (a good opportunity to spend time with my parents, while they were drinking their coffee and getting ready to leave for work), and I wasn’t able to get out of bed in the afternoon.

I just couldn’t find any good reason for me to get up and do… anything. Funny thing was that, from the outside, people thought that I was working too much.

It’s now easy for me to look back and pinpoint exactly my mistakes that led to that situation. Every tiny bad decision, toxic element I accepted in my life – I rationalized and made excuses for each and every one of them, not aware of the catastrophic compound effect and chain reaction they’ll have.

More than five years have passed since, and I still think about those hard times almost on a daily basis. I can’t let myself forget about them or ever make the same mistakes.

So take advantage of the upcoming spring break, when everyone and everything slows down, and make a list of all the rotten apples you let in your life. Say no to them before it’s too late and end up in a hole so deep you won’t be able to get out of it (or get out of bed in the morning).

Sorry for today’s darker thoughts, but you know my motto: „not sharing an opportunity to learn is a cardinal sin” (I actually have this quote printed on my notebook, thanks to Miruna’s illustration).

On to this weekend’s articles:

This might help you with what I was saying earlier, as what you’re consuming online is affecting you as well. Cal Newport, one of my favorite authors, makes a point in favor of digital minimalism, and then goes on to list the basic principles for it.

Sol Orwell is the founder of Examine.com (largest database on nutrition and supplements). He’s been making money online for almost 20 years and generated over 8 figures. He made enough money that he was able to retire in mid 2000s and travel around the world for five years.

However, Sol credits most of his success to the luck factor. In this article, Sol says that 90% of his success should be attributed to the „ovarian” lottery: that he was born to the right set of parents who decided to move from the East to the West. Born in Pakistan, Sol’s family decided to move to Canada when he was 14.

Sol argues that almost all of his cousins and relatives who remained in Pakistan are smarter than him, work harder than him, and, even so, he’s 100x more successful than they are.

It’s a great article on survivorship bias. Perhaps a little bit too extreme when he wants to make certain points, but can’t blame him.

I actually had the chance to talk to Sol recently and interview him for The CEO Library, and here’s an interesting thing he said about business books:

„I hate business books. They are full of wishy-washy inspirational stuff and rarely of anything actionable. And even when actionable, it’s from the context of that founder and the story they’ve spun, not the reality that most people face.”

Even if I wouldn’t express it this harsh, I agree with Sol on this one. This is one of the main reasons we’re building The CEO Library: we’re personally a little bit too tired of bloated business / self-development books, so we want to help people (especially early entrepreneurs) figure out the right books for them – both on a personal and professional level. To cut through clutter, process those books and put them into context.

I’m a big fan of MVMT watches. I discovered them thanks to an Instagram ad (ha. how often do I get to say that?) and received one as a bday gift a few years ago from my group of girlfriends. However, I didn’t know anything about their founders, their story or how they grew the brand.

Launched just a few years ago by two broke and debt-filed college dropouts, MVMT became world’s fastest growing watch brand. It’s interesting to read about the thinking process behind this growth: the problem they identified, the market specifics, how they were able to grow the brand without any investors, and leverage social proof.

The previous article was shared with me by Andra Zaharia, one of my best friends (and also „responsible” for my first MVMT watch).

Andra just started her own mailing list, a newsletter called „How do you know?” about how we can improve our decision-making process. Since we’re both guided by the same values, I’m guessing you’ll enjoy her newsletter as well (and her upcoming podcast – both in English).

And if I’m right about this, you owe me a cup of coffee! ☕ (if you subscribe today, you’ll get her first email in your inbox tomorrow morning – Saturday, that is). 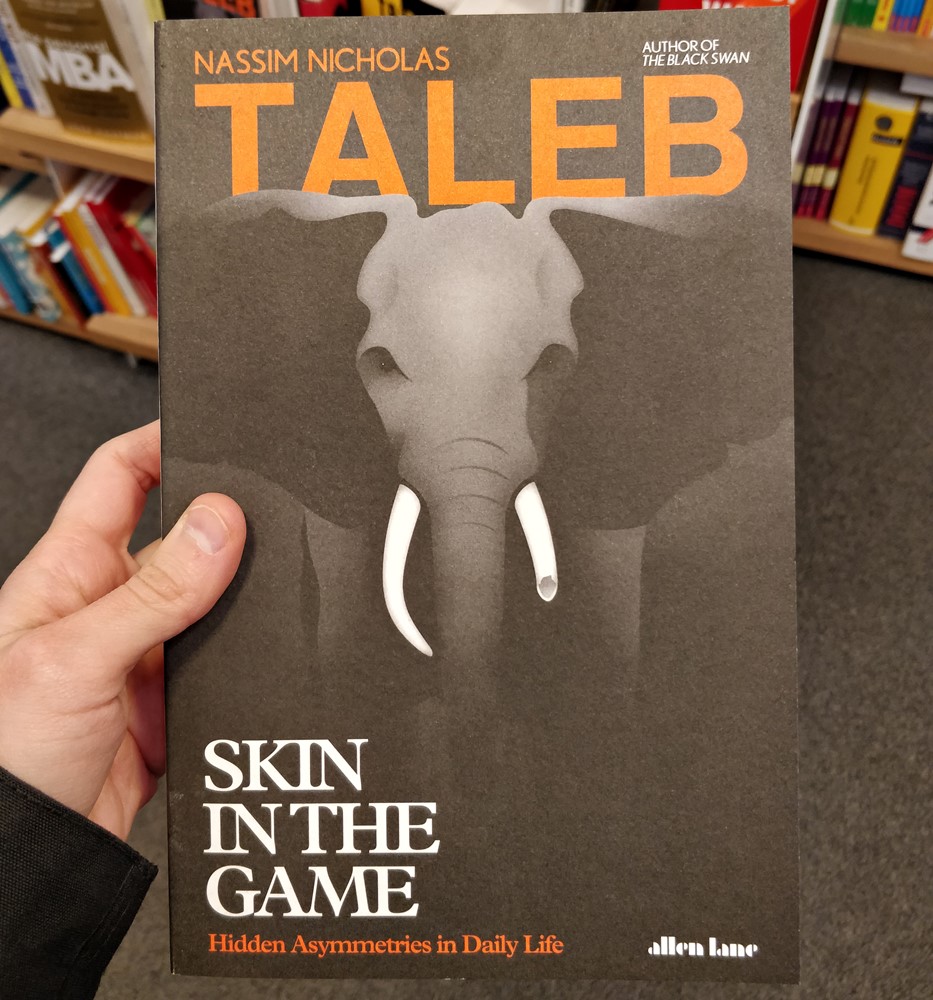 This is what I’m currently reading: Nassim Nicholas Taleb – Skin in the Game.

I just love Taleb‘s work. I already praised his previous book, Antifragile: reading it was probably one of the best things I did in 2016, it felt like a brain upgrade.

A few weeks ago he released a new book that I’ve been expecting for a while now, called „Skin in the Game: Hidden Asymmetries in Daily Life„. I’m actually reading it as an eBook, I took the photo above in one of the local bookshops (amazed that it’s already distributed). After taking notes on almost every page of Antifragile, I said I’ll never read his books in a physical format ever again, although I’ll probably break this rule – his new book is so good that I want to have it in the house as well.

Taleb argues that skin in the game is essential to understand the world, but also for risk management, responsibility, fairness and commercial efficiency. The underlying theme is detecting bulls**t and filtering true expertise.

We’re at a point in history where too many non-risk takers have too much power. Just think about our political system and bureaucrats: they have no responsibility and don’t care about the effects of their actions (or lack of actions).

Online „influencers” aren’t exempted either, and those who publicly offer advice should be exposed to the consequences. If you’re an anti-vaccination celebrity and affect a child’s life (no matter if they’re collateral victims or those of the anti-vax parents), you should be held accountable as well.

It’s the same with what I’m doing through this newsletter. If I share an opinion here and you follow it, I’m morally obligated to be exposed to the consequences.

To be honest, I’m not sure I’d recommend Taleb’s new book to anyone, as his ideas might be too hard to understand. It would make more sense to start with his previous books from the „Incerto” series, such as Fooled by Randomness, Black Swan or Antifragile, before you read this one.

Or, better yet: start with this article he published on Medium, just to get a taste: „What do I mean by Skin in the Game? My Own Version„.

Have a quiet & sunny weekend,